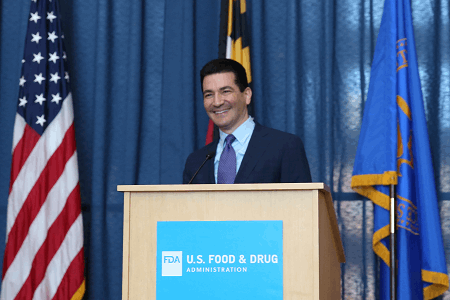 “We have gotten outside jobs in order to make this small farm stay alive. Because with what we’re currently getting on the marketplace and with coming into compliance and everything, there is no way that we could afford to continue to do what we love doing without taking on other incomes.”
Mendocino County Grower Johanna Mortz On Small Cannabis Businesses Struggling With New State Regulations
“This approval serves as a reminder that advancing sound development programs that properly evaluate active ingredients contained in marijuana can lead to important medical therapies. And, the FDA is committed to this kind of careful scientific research and drug development. Controlled clinical trials testing the safety and efficacy of a drug, along with careful review through the FDA’s drug approval process, is the most appropriate way to bring marijuana-derived treatments to patients.”
U.S. Food & Drug Administration Commissioner Scott Gottlieb On The Approval Of Epidiolex, The CBD Infused Epilepsy Drug