CCMA Greenbrief May 10: US Marijuana Sales May Reach $10 Billion This Year…CA Cannabis Tax Revenue 80% Below Expected Projections… Marijujana Being Recommend For Pregnancy… 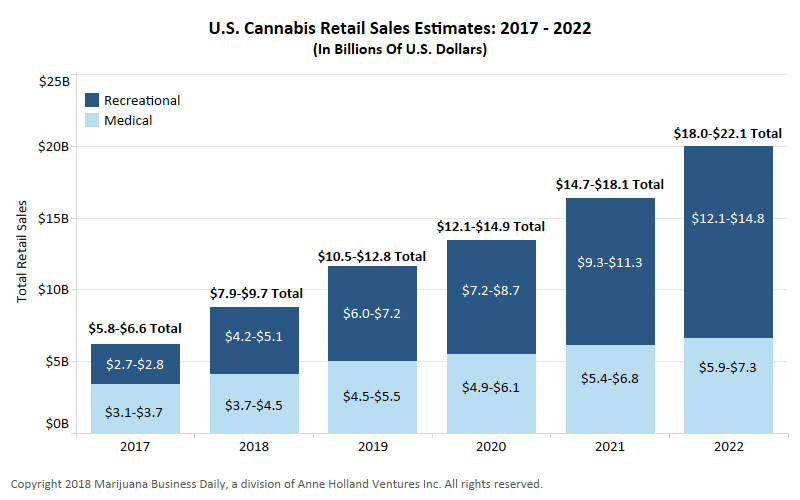 “We started off last year with 10 employees. When the December tax bill came, it was either pay the tax or reduce the headcount.”
Jesse Melendrez, Monterey County business owner on cannabis taxes

“The cannabis sector currently employs an estimated 125,000 to 160,000 full-time workers. To put this in perspective, there are potentially more full-time marijuana industry workers than there are librarians or kindergarten teachers throughout the country – and over 6 times the number of coal miners in the U.S.”
Chris Walsh, industry analyst and editorial vice president of MJBizDaily

Why California’s First-Quarter Cannabis Tax Revenue Is 80% Below What The State Projected (CA- Cannabis Tax)
San Francisco Business Times (May 10, 2018) It’s a bummer, man. California’s toke, I mean take, on cannabis tax revenue amounted to disappointing $34 million in the first quarter, the first round since recreational marijuana was legalized in the state.
https://www.bizjournals.com/sanfrancisco/news/2018/05/10/california-cannabis-tax-revenue.html

Cannabis Tax Revenue In California Falls Far Short Of Projections (CA- State Taxes)
San Francisco Chronicle (May 9, 2018) State taxes on legal marijuana sales in California are coming in far short of projections — $34 million in the first quarter of 2018, about a third of the revenue that officials anticipated, according to data released Wednesday by the Legislative Analyst’s Office.
https://www.sfchronicle.com/news/article/Cannabis-tax-revenue-in-California-falls-far-12902556.php

Fearing Economic Collapse, Cannabis Growers Lobby For Sharply Reduced County Cultivation Tax (CA- Cannabis Tax)
Monterey County Weekly (May 10, 2018) When the first green sprouts of cannabis appeared out of the soil in containers in a corner of his greenhouse, first-time farmer Jesse Melendrez celebrated. He left behind a 30-year career in human resources for a “rare opportunity” to lease the greenhouse in Monterey County last year and build a legacy for his family. He spent at least six months fixing up the dilapidated structure before starting the first growing season.
http://www.montereycountyweekly.com/news/local_news/fearing-economic-collapse-cannabis-growers-lobby-for-sharply-reduced-county/article_e688003a-53d2-11e8-b726-a3802801ad69.html

California Flower Town Wrestles With Odor Amid Shift To Pot (CA-Cannabis Industry)
Associated Press (May 10, 2018) This picturesque coastal town cradled by mountains and sandy shores is a scene out of a Southern California postcard. Residents of Carpinteria say they feel lucky to live in what they consider a slice of paradise. But change is in the air. And sometimes, they say, it stinks.
https://apnews.com/1116f2dfe0734ff5af1a21804e053e67/California-flower-town-wrestles-with-odor-amid-shift-to-pot

Marijuana Shops Recommend Products To Pregnant Women, Against Doctors’ Warnings (USA- Cannabis Research)
CNN (May 10, 2018) A majority of cannabis dispensaries in Colorado recommended their products to women posing as pregnant customers with morning sickness, clashing with doctors’ warnings about the potential harms, according to a study published Wednesday in the journal Obstetrics & Gynecology.
https://www.cnn.com/2018/05/10/health/cannabis-marijuana-dispensaries-pregnancy-study/index.html

Walmart Will Institute New Limits On The Amount Of Opioids It Hands Out (USA- Opioid Epidemic)
Civilized (May 10, 2018) One of the biggest problems causing the opioid crisis is how many pills doctors and pharmacies are willing to give their patients. But Walmart is looking to change that.
https://www.civilized.life/articles/walmart-new-opioid-policy/

Why Budtending Could Be The Hottest Job Of The Next Five Years (USA- Cannabis Employment)
Fortune (May 9, 2018) Retail sales of medical and recreational marijuana in the United States are expected to come in between $8 billion and $10 billion this year (a nearly 50% increase from 2017) and could reach $22 billion by 2022, according to Chris Walsh, industry analyst and editorial vice president of MJBizDaily. And that growth means there are a ton of job opportunities.
http://fortune.com/2018/05/09/cannabis-sales-employment-budtending/

Can Canada Undo ‘Injustice’ Of Cannabis Possession Convictions? (CANADA- Local Ordinances)
Aljazeera (May 10, 2018) The Toronto-based lawyer is among a group of other professionals and activists leading a campaign to get the Canadian government to grant amnesty to those with simple cannabis possession convictions on their records.
https://www.aljazeera.com/indepth/features/canada-undo-injustice-cannabis-possession-convictions-180509182743188.html