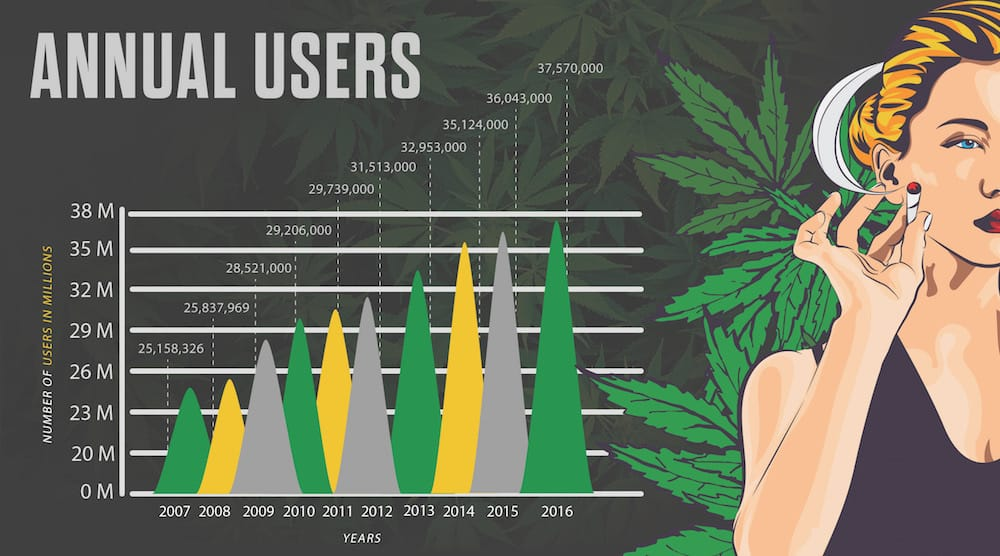 Marijuana Users By The Numbers

“A lot of people are trying to patent various strains, but that hasn’t been very successful either due to questionable genetics of individual strains available. I think they realized that the only hope for them to make money is to patent a specific cannabinoid, develop it chemically, synthetically and then put it into pill or liquid form. That’s how they can profit eventually.”
Dr. Sue Sisley On The Medical Uses Of Marijuana
“We all miss the small business model of growing for the medical dispensaries, with growers focused on their patients. I’m glad we’re taking steps away from the drug war and mass incarceration with legalization, but no one shed a tear for the loss of livelihood for many small growers who couldn’t afford going legal.”

California Co-Working Licenses Could Help Further Equity in Cannabis (CA – Cannabusiness)
Leafly (May 16, 2018) Small-scale caterers and boutique bakers sometimes share the amenities—and costs—of a commercial kitchen to help keep overhead manageable. In California, a new type of business license could allow small-scale and startup cannabis companies to do exactly the same thing.
https://www.leafly.com/news/industry/california-co-working-licenses-could-help-further-equity-in-cannabis
Why California Needs Banking For Legal Cannabis Operations (CA – Cannabis Market)
LA Sentinel (May 17, 2018) Despite the cannabis market growing in 38 states, the federal government continues to assert its right to classify cannabis as a Schedule I drug under the Controlled Substances Act.  This classification creates a very unique challenge for the industry to succeed and the ability to obtain banking services.
https://lasentinel.net/why-california-needs-banking-for-legal-cannabis-operations.html
Marijuana Growers Stepping Up To Professional Business Management (CA – Cannabis Cultivation)
Golden State Newspaper (May 17, 2018) Lawyers, accountants and insurance agents were on hand to pitch their services at a meeting for one of the largest and now legal industries in the county growing and selling marijuana. On May 9 at the Freight Building at Depot Park, the county’s premier cannabis industry trade association, Green Trade of Santa Cruz, hosted a meeting for their members to network with the business support professionals needed to be successful.
http://www.goldenstatenewspapers.com/press_banner/marijuana-growers-stepping-up-to-professional-business-management/article_cac09d48-59eb-11e8-87df-279206bb24c2.html
California Police Express More Concern About Marijuana Impact On Vehicle Drivers (CA – Under The Influence)
Xinhuanet (May 17, 2018) California Highway Patrol (CHP) police are more concerned about the growing problem of the impact of smoking marijuana on vehicle drivers, which has caused several deaths since last year, a TV report said Wednesday.
http://www.xinhuanet.com/english/2018-05/17/c_137186285.htm
Cluster Of New Laws Giving Some Cannabis Users Big Headache (CA – Cannabis Regulation)
The Acorn (May 16, 2018) The passage of Prop 64 in 2016 legalized recreational cannabis consumption across California, but also gave the state’s more than 480 cities the power to decide for themselves whether to allow the commercialization of the drug within their borders.
https://www.theacorn.com/articles/cluster-of-new-laws-giving-some-cannabis-users-big-headache/
Another Huge Solar Farm Proposed For Avenal Cutoff (CA – Cannabis Cultivation)
The Sentinel (May 17, 2018) SF-based First Solar has filed for a conditional-use permit to build a 300-megawatt solar farm on 2,103 acres. The project, named Daylight Legacy Solar, is being proposed along the Avenal Cutoff, following on the filing of another 300-megawatts project by Recurrent Energy, RE Slate, last month. The proposal continues a trend of construction of solar farms on water-short farmland in the western part of Kings County.
https://hanfordsentinel.com/news/local/business/another-huge-solar-farm-proposed-for-avenal-cutoff/article_f348759b-a575-5603-9a94-aad5fd1c24c5.html
4 Inspirational Lessons From Women Leaders In The Cannabis Industry (USA – Cannabusiness)
Inc. (May 16, 2018) As an entrepreneur in the wine industry, I hear a lot of chatter about how the surging cannabis sector is going to eat away at wine’s share of “recreational spend,” particularly since voters in California legalized non-medical marijuana via Proposition 64 in November 2016. It’s a viable concern, mainly because cannabis is far from limited to the state of California where it grows alongside, and often hand in hand, with wine grapes. Twenty-nine states now allow cannabis for medical or recreational use and sales are projected to reach $75 billion by 2030 from about $6 billion in 2016.
https://www.inc.com/cathy-huyghe/leadership-lessons-from-entrepreneurial-women-in-marijuana-industry.html
Why Medical Cannabis Isn’t A Fully Booming Industry…Yet (USA – Cannabis Research)
Equities (May 17, 2018) As cannabis sheds its stigmas and begins to permeate the mainstream, many of its therapeutic properties are coming into focus. One of the most common uses for medical marijuana is pain control, especially for chronic pain, which plagues millions of Americans. In this regard, one of the newest trends is cannabidiol, or CBD. This compound is non-psychoactive and has been known to reduce stress, inflammation, anxiety and pain.
https://www.equities.com/news/why-medical-cannabis-isnt-a-fully-booming-industry-yet
Congressional Republicans Block Votes On Hemp Amendments (USA – Federal Regulation)
Marijuana Moment (May 16, 2018) In the latest development in a series of anti-cannabis moves, congressional Republican leadership has blocked consideration of several industrial hemp amendments. Supporters were seeking to attach the measures to the large-scale Farm Bill, which sets food and agriculture policy for the country, but the House Rules Committee on Wednesday decided that the proposals cannot be considered on the floor.
https://www.marijuanamoment.net/congressional-republicans-block-votes-on-hemp-amendments/
RAND Study Says Cannabis Ads May Increase Underage Use (USA – Cannabis Use)
Leafly (May 16, 2018) In a study that could affect the future of cannabis advertising and ad regulations, researchers with the RAND Corporation have found that medical marijuana advertising may contribute to increased cannabis use among adolescents. The study was published early Wednesday in the journal Drug and Alcohol Dependence.
https://www.leafly.com/news/health/rand-study-says-cannabis-ads-may-increase-underage-use
Smoke ’Em? Judge Will Decide On Puffing Medical Marijuana (FL – Cannabis Regulation)
Florida Politics (May 16, 2018) It’s now up to a Tallahassee judge whether the Legislature overstepped when it outlawed the smoking of medical marijuana. Attorneys for the state and patients who want to smoke the drug squared off in a Leon County courtroom Wednesday before Circuit Judge Karen Gievers. She didn’t immediately rule after the close of evidence, but could issue a decision as early as tonight, if previous experience holds.
http://floridapolitics.com/archives/263863-smoke-em-medical-marijuana