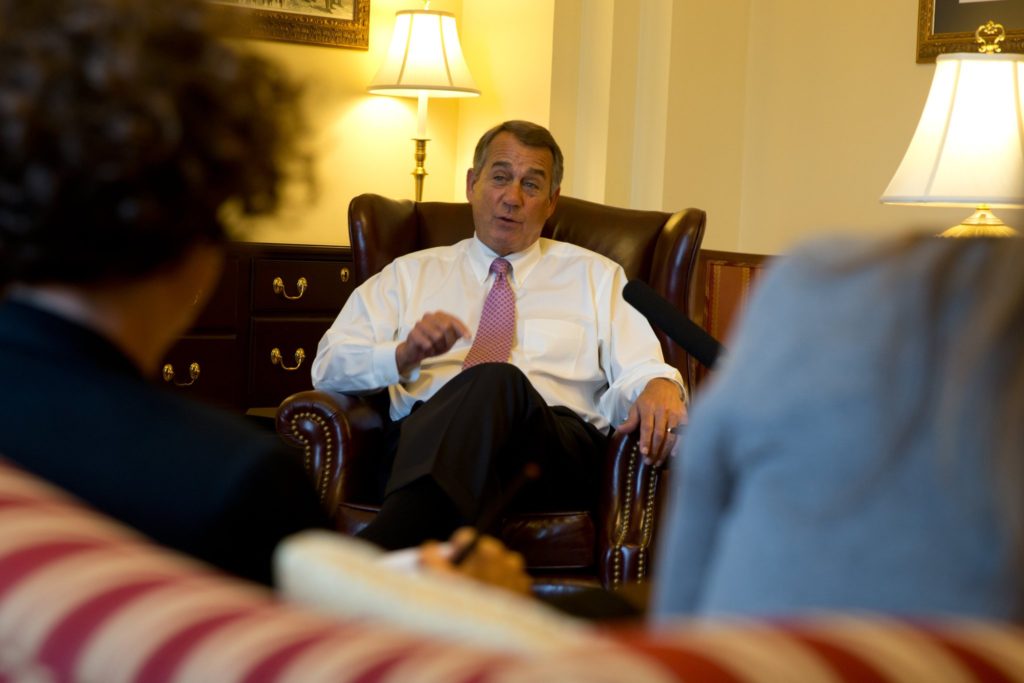 John Boehner, Former House Speaker Reflected On His Career During An Interview.
“I’m convinced de-scheduling the drug is needed so we can do research, help our veterans, and reverse the opioid epidemic ravaging our communities.”
John A. Boehner, the speaker of the House from 2011 to 2015, referring to how the federal government classifies marijuana.
“I don’t think alcohol is going anywhere any time soon, but yes, I definitely would say that cannabis is curtailing alcohol consumption. Of the ones who consume alcohol, 82 percent of them decreased their alcohol intake due to cannabis consumption. And 11 percent quit drinking altogether.”
Sheena Shiravi, Eaze Director of Communications

John Boehner’s Marijuana Reversal: ‘My Thinking on Cannabis Has Evolved’ (USA- Cannabis Advocacy)
New York Times (April 11, 2018) John A. Boehner, the speaker of the House from 2011 to 2015, reversed a long-held stance against marijuana legalization on Wednesday, saying on Twitter that “my thinking on cannabis has evolved.”

Vacaville, Calif., Gives Direction To Regulate Personal Cultivation Of Cannabis (CA- Local Ordinaces)
Cannabis Business Times (April 12, 2018) Outdoor cannabis grows drew a negative response from the Vacaville City Council Tuesday, while a permit program for people who want to grow up to six plants indoors will be explored further. Both issues will return to the Vacaville City Council for a vote.

California Beer Sales May Be Taking A Hit Because Of Recreational Pot Legalization (CA- Cannabis Legalization)
TheBlaze.com (April 12, 2018) California beer sales have recently taken a hit, and some industry experts believe recreational marijuana may be the reason for the drop.
https://www.theblaze.com/news/2018/04/12/california-beer-sales-may-be-taking-a-hit-because-of-recreational-pot-legalization

Attend NCIA’s Southern California Quarterly Cannabis Caucus Tonight (CA- Cannabis Events)
Weed News (April12, 2018) California is the cannabis capital of America, and arguably the world. People from other states, my home state of Oregon included, may disagree but California’s large population and long history with cannabis culture make it the leader in my opinion, and that will likely always be the case.
https://www.weednews.co/attend-ncias-southern-california-quarterly-cannabis-caucus-tonight/

California Legislature Pounces on Employers With 12 New Bills (CA- Cannabis Legislature)
The National Law Review (April 11, 2018) Like a pride of lions flashing teeth and fangs, the California legislature is on the hunt in 2018. As has become an annual spring ritual, Sacramento politicians have once again proposed a progressive labor agenda for medical marijuana employers.
https://www.natlawreview.com/article/california-legislature-pounces-employers-12-new-bills

Weapons, Pot Trial Runs Into Another Delay (CA- Cannabis Industry)
Redding Record Searchlight (April 11, 2018) The long-delayed trial for a Cottonwood man and veterans-advocate charged with misdemeanor marijuana and felony assault weapon charges was halted Wednesday before it got started.
https://www.redding.com/story/news/local/2018/04/11/weapons-pot-trial-runs-into-another-delay/507430002/

Pot Can Help Your Pets Too (USA- Cannabis Industry)
TheStranger.com (April 11, 2018) Americans spend more than $15 billion a year taking care of their pets. But for some pet owners, thousands of dollars in veterinarian bills produces little benefit. What do you do if conventional medicine won’t make your pet’s anxiety, arthritis, or crippling epilepsy go away?
https://www.thestranger.com/weed/2018/04/11/26019503/pot-can-help-your-pets-too
—
—