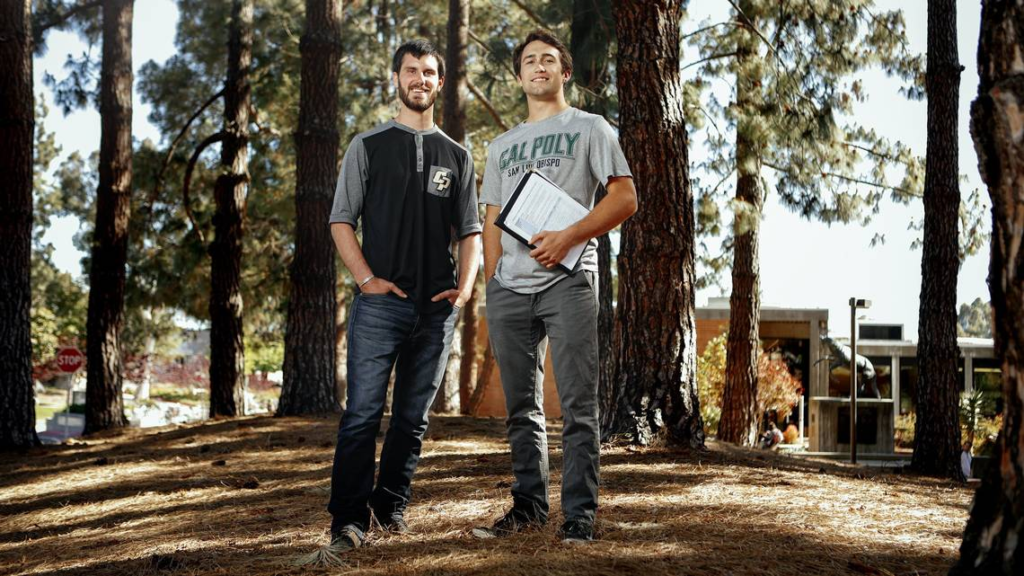 Cal Poly Students Conor Stephen, Left, And Ted Fitzgerald Are Working To Get A Pilot Program Started At The University To Conduct Research On Industrial Hemp
“We’re doing it for the overall scientific understanding of this crop. We’re lacking so much information, and a lot of the information we do have is misinformation. It’s just been so slandered. We’re trying to move mountains.”
Cal Poly Student Conor Stephen On His Efforts For Cannabis Research
“By legalizing hemp and empowering states to conduct their own oversight plans, we can give the hemp industry the tools necessary to create jobs and new opportunities for farmers and manufacturers around the country.”
Senate Majority Leader Mitch McConnell (R – KY) On Cannabis Research

California Bureau of Cannabis Control Proposes Extension Of Emergency Cannabis Regulations (CA – Industry Regulations)
Ganjaprenuer (May 18, 2018) The California Bureau of Cannabis Control has proposed the state readopt and extend the current, emergency cannabis industry regulations. Previous regulations called for the merging of the medical cannabis industry (MCRSA) and adult-use industry (AUMA) into what’s now known as MAUCRSA, governed by the Bureau of Cannabis Control. As part of the current regulations, applicants have had to apply for both adult and medical use licenses, Type A and Type M, respectively.
https://www.ganjapreneur.com/california-bureau-of-cannabis-control-proposes-extension-of-emergency-cannabis-regulations/
California’s ‘Pot Desert’ Problem (CA – Cannabis Market)
LMT Online (May 21, 2018) California is the largest market for recreational marijuana in the country, but thanks to some loopholes in the law many residents don’t have access to it. What’s resulted is large swathes of “pot deserts,” in which 40 percent of the state has drive 60 miles or more to find a licensed dispensary, according to the Sacremento Bee.
https://www.lmtonline.com/news/article/California-s-Pot-Desert-Problem-12926091.php
California Just Reduced Its Marijuana Tax Revenue Estimates (CA – Legal Cannabis)
Motley Fool (May 19, 2018) Over the past 22 years, the green rush has engulfed North America. In 2001, Canada legalized medical marijuana, and it’s fully expected to become the first developed country in the world to OK the sale of adult-use recreational cannabis by this summer. In June 2017, Mexico legalized medical cannabis. And between 1996 and 2018, 29 states in the U.S. have passed legislation allowing for medical marijuana to be prescribed by physicians, with nine other states allowing the use of recreational pot by adults ages 21 and up.
https://www.fool.com/investing/2018/05/19/california-just-reduced-its-marijuana-tax-revenue.aspx
This ‘Farmer’s Market’ Wasn’t Your Normal Kale Stand. Now The City Wants To Shut It Down (CA – Cannabusiness)
The Sacramento Bee (May 19, 2018) Just a few blocks from where you can buy cage-free eggs and organic kale every Saturday morning at the Midtown Farmer’s Market, another market – allegedly illicit – has been operating for several weeks in Sacramento. Instead of fruits and veggies, the operators of the 11:30 Club on 26th Street in midtown have been illegally selling marijuana out of a “farmer’s market,” according to a civil complaint filed May 10 in Sacramento Superior Court by the city of Sacramento.
http://www.sacbee.com/news/local/news-columns-blogs/city-beat/article211438994.html
Cal Poly Students Want To Grow And Study Hemp — But There’s A Big Hurdle In The Way (CA – Cannabis Cultivation)
San Luis Obispo Tribune (May 18, 2018) Two Cal Poly students are making a push to bring industrial hemp research to the university in the coming years. Ted Fitzgerald and Conor Stephen have gathered nearly 3,000 signatures from students and faculty members in support of an agricultural pilot program that would study the growth, cultivation and marketing of industrial hemp.
http://www.sanluisobispo.com/news/local/education/article211202334.html
California Trippin’: Your Guide To Getting High In The Golden State (CA – Recreational Use)
Salon (May 20, 2018) If California has been consistently good at anything, it’s capturing the imaginations of people across the world. From the promise of rivers stuffed with gold in 1849 to the sensuous exploration of the self during the Summer of Love, to the chance to make it big on the big screen, dreamers have always flocked to the Golden State in pursuit of a more radical, fulfilling life.
https://www.salon.com/2018/05/20/california-trippin-your-guide-to-getting-high-in-the-golden-state/
DEA Chief’s Congressional Testimony About Legal Marijuana Angered Some, Baffled Many (USA – Cannabis Regulation)
Entreprenuer (May 18, 2018) It’s hard to know what to make of the testimony on legalized marijuana from Robert Patterson, chief of the Drug Enforcement Agency, before the House Judiciary Committee earlier this month. He attributed deaths to marijuana use but offered no information to back that up. He said he didn’t see “mass incarcerations” of marijuana users, even though FBI numbers show they increased in 2016 (the last year numbers are available). He said he was unaware of the many studies showing that opioid use has dropped in places where marijuana is legal.
https://www.entrepreneur.com/article/313562
Rider Protects Medical Marijuana, Hemp Bills Blocked, SCOTUS Ruling Supports State Marijuana Laws (USA – Federal Regulation)
Marijuana.com (May 20, 2018) The past week in cannabis news, a congressional committee added a rider to protect medical marijuana from gratuitous prosecution by the DOJ, a House Rules Committee obstructed three hemp amendments, and a ruling by the Supreme Court of the United States could have positive ramifications on state-sanctioned legalization.
https://www.marijuana.com/news/2018/05/rider-protects-medical-marijuana-hemp-bills-blocked-scotus-ruling-supports-state-marijuana-laws/
Confusion As Marijuana Is Legalized But Big Banks Still Test Employees (USA – Workplace Policies)
EFC (May 18, 2018) Marijuana has been legalized for recreational use in nine states, with several others likely soon to follow. But don’t be fooled by the headlines. While you can smoke it without fear of prosecution in states like California and Colorado, marijuana can still cost you a job offer at large public banks and smaller private firms.
https://news.efinancialcareers.com/ch-en/315701/marijuana-testing-banks
Meghan Markle’s Nephew Cashes In On Royal Wedding By Creating New Cannabis Strain (USA – Cannabusiness)
Straight (May 19, 2018) It’s called Markle Sparkle and it’s getting far more attention than most new strains of cannabis. According to the Daily Mail, the Duchess of Sussex’s nephew, Tyler Dooley, came up with the idea in advance of today’s Royal wedding.
https://www.straight.com/cannabis/1078101/meghan-markles-nephew-cashes-royal-wedding-creating-new-cannabis-strain
Legal? Not Here: States Allowing Recreational Use Emerge As Illicit Marijuana Source (USA – State Regulations)
Texarkana Gazette (May 20, 2018) rkansas Highway Police have always made drug seizures at weigh stations and during traffic stops. Mexican drug cartels have long used southern highways to transport the drugs for distribution across the country. But lately the police have been seeing a new source of marijuana—states where its recreational use is legal.
http://www.texarkanagazette.com/news/opinion/editorials/story/2018/may/20/legal-not-here-states-allowing-recreational-use-emerge-illicit-marijuana-source/727046/