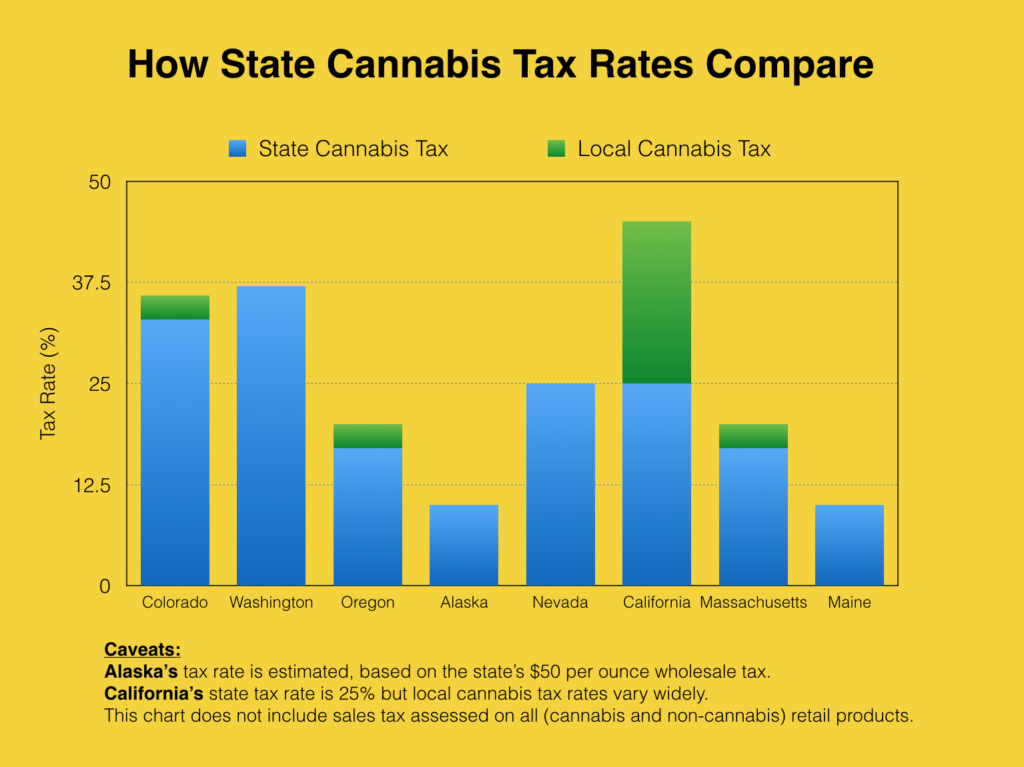 Hezekiah Allen, Executive Director Of The CA Grower’s Association, On The Unregulated Market That Still Exists
“There is no magic number. But we know what is too much for us, and the cities know what is not worth it for them, and there’s a sweet spot in the middle.”
Randi Knott, Director Of Government Affairs For Genezen, On Tax Rates

Leafly (May 23, 2018) California’s Proposition 64 was pitched to the public as a dual-purpose policy: By legalizing cannabis, America’s largest cannabis-producing state would simultaneously smother its illicit market while generating billions of dollars in tax revenue. But in the year since voters approved the law, it’s become clear that these twin objectives may not be easily compatible.
https://www.leafly.com/news/politics/californias-high-cannabis-tax-could-doom-legalization-heres-a-fix
Pot Revenues No Jackpot Yet For California (CA – Cannabis Revenue)
East County Magazine (May 23, 2018) Pot sales in California have not yet been a jackpot for state revenues since legalization of recreational cannabis in January. New Frontier Data, a data analysis firm, has lowered their projections for legal pot sales this year in California from $3.8 billion to $1.9 billion – or only half what was projected.
http://eastcountymagazine.org/pot-revenues-no-jackpot-yet-california
One Day, You’ll Get to Travel the Northern California Cannabis Trail (CA – Cannabis Activities)
Marijuana.com (May 22, 2018) Someday soon people will be able to download an app on their smartphones, hop in a car and visit 30-plus spots throughout Northern California to discover the rich history, unique people, and stories tied to the cannabis movement. That’s a plan Brian Applegarth, a cannabis historian and tour operator, says is going to be a reality in the next few years. Applegarth has been raising funds, interviewing artists, and building consensus to create the Cannabis Trail, planned as a self-guided, 640-mile-long tour running from Santa Cruz to Arcata.
https://www.marijuana.com/news/2018/05/northern-californias-cannabis-trail-in-development/
Marijuana Landlord Turns Activist, Arguing Local Policies Are Slowing Legal Weed (CA – Cannabusiness)
The Orange County Register (May 23, 2018) Stephanie Smith was balancing one of her 2-year-old twins on a hip during a quiet morning in December when she heard a commotion outside her home in Los Angeles’ affluent Pacific Palisades neighborhood. Someone began banging on her front door. As she moved to open it, she saw a line of police officers in her front yard and red laser gun sights coming through the windows, bouncing off her and her children.
https://www.ocregister.com/2018/05/23/marijuana-landlord-turns-activist-arguing-local-policies-are-slowing-legal-weed/
New Cannabis Legislation Could Update a Million Convictions (CA – State Legislation)
NBC Los Angeles (May 23, 2018) The Los Angeles County Board of Supervisors voted Tuesday to back legislation that would automatically remove or reduce certain cannabis-related convictions. Supervisors Mark Ridley-Thomas and Hilda Solis recommended support for AB 1793. The bill sponsored by Assemblyman Rob Bonta, D-Oakland, would shift the work of identifying cases eligible for dismissal or misdemeanor status to the Department of Justice, rather than individuals convicted.
https://www.nbclosangeles.com/news/local/Cannabis-Convictions-update-California-legislation-483384571.html
Women Cite ‘Grass Ceiling’ in Male-Dominated Weed Industry (USA – Cannabis Industry)
NBC Los Angeles (May 22, 2018) When Danielle Schumacher attended her first convention of marijuana activists about 15 years ago, she could count on one hand all the women in a room of older men. The lack of diversity struck the then-college student, who remembers feeling out of place but also determined to make her mark.
https://www.nbclosangeles.com/news/health/Women-Cite-Grass-Ceiling-in-Male-Dominated-Weed-Industry-483333321.html
‘Sustainability Is Not Enough’: Why Cannabis Farmers Should Look To Regenerative Agriculture (USA – Cannabis Famring)
Sustainability is a hot-button topic that’s become increasingly important as commercial cannabis farms scale up with expanding legalization. To be “sustainable” means you’re able to maintain a level of output continuously. With farming, this means providing the correct inputs for a healthy and thriving ecosystem as you take outputs from the land. Amending soil, introducing crop diversity, and sourcing water efficiently are all part of sustainable agriculture.
https://www.leafly.com/news/industry/why-cannabis-farmers-should-look-at-regenerative-agriculture
7-Eleven Stores to Carry CBD Products By Year’s End (USA – Cannabis Accessibility)
Ganjaprenuer (May 23, 2018) 7-Eleven stores across the country will begin carrying CBD products by the end of 2018, CBD company Phoenix Tears announced today in a press release. Founded in 2010, Denver, Colorado-based Phoenix Tears produces and distributes CBD tinctures, oral sprays, and other products that have been derived entirely from hemp. According to the release, up to 4,500 7-Eleven locations should carry the products by the end of this year — that number could go as high as 7,000 different stores within the next three years.
https://www.ganjapreneur.com/7-eleven-stores-to-carry-cbd-products-nationwide/
MedMen Breaks Ground On Large-Scale California Cannabis Cultivation And Manufacturing Facility (USA – Cannabis Manufacturing)
New Cannabis Ventures (May 22, 2018)  MedMen Enterprises has broken ground on a high-tech cannabis factory in Desert Hot Springs, California, the company’s second, large-scale marijuana cultivation and manufacturing facility. Last month, the company inaugurated its factory in Mustang, Nevada, the largest, most high-tech facility of its kind in the state.
https://www.newcannabisventures.com/medmen-breaks-ground-on-large-scale-california-cannabis-cultivation-and-manufacturing-facility/
THC Tolerance: Here’s Why T-Breaks Work So Quickly (USA – Health Effects)
Leafly (May 17, 2018) Cannabis doesn’t kill brain cells like methamphetamine. Unlike alcohol, it doesn’t cause the connections between these cells to wither away. Instead—cue scary music—repeated cannabis consumption leads to a diminished effect better known as “tolerance.”
https://www.leafly.com/news/science-tech/thc-tolerance-heres-why-t-breaks-work-so-quickly
At Denver’s Coffee Joint, Cannasseurs Enjoy The Bean And The Leaf (CO – Cannabusiness)
Leafly (May 22, 2018) In November 2016, voters in Denver approved an ordinance allowing the onsite social consumption of cannabis in licensed businesses. Since then, only one club has opened: The Coffee Joint, an inconspicuous storefront in a light-industrial section of Denver’s Lincoln Park neighborhood.
https://www.leafly.com/news/lifestyle/at-denvers-coffee-joint-cannasseurs-enjoy-the-bean-and-the-leaf
Medical Marijuana Legal On College Campuses, Arizona Supreme Court Rules (AZ – Cannabis Regulation)
AZ Central (May 23, 2018) The Arizona Supreme Court ruled Wednesday that the state can’t criminally charge public college students for having and using marijuana on campus if they have a medical marijuana card. The high court said a 2012 law banning medical marijuana on college campuses violated the Arizona Constitution’s protections for voter-approved laws. The court also vacated a marijuana possession conviction for the student, Andre Maestas, who fought the law.
https://www.azcentral.com/story/news/local/arizona-health/2018/05/23/medical-marijuana-allowed-college-campuses-arizona-supreme-court-rules/634146002/