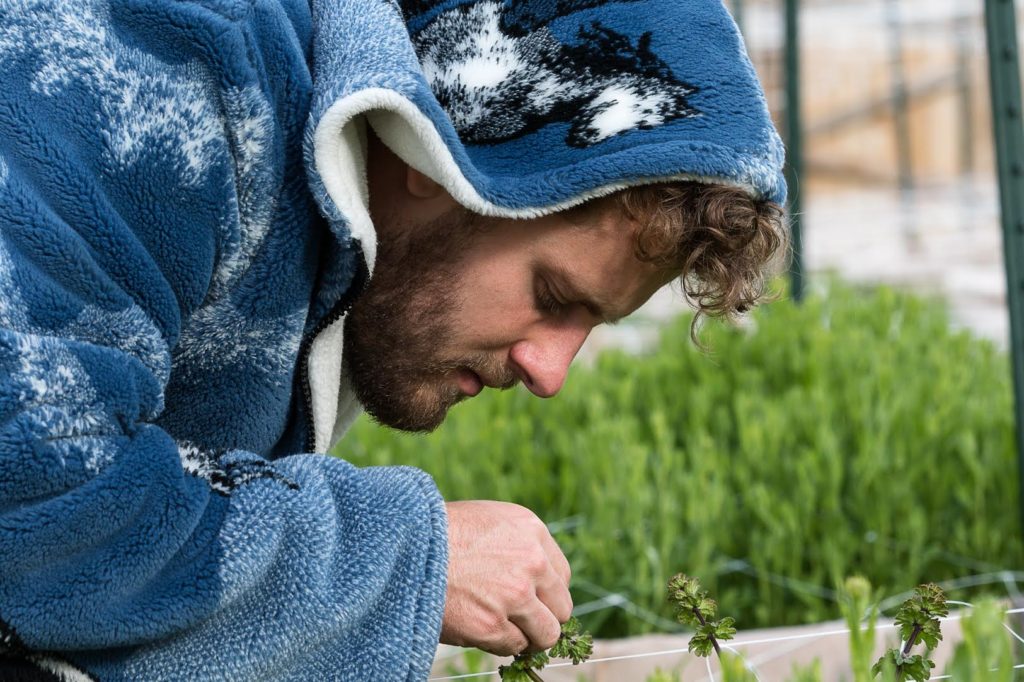 Connor Kramme, Co-Founder Of Green Box Inc. And University Of California, Berkeley Alumnus, Tends To His Cannabis Farm In Northern California. Kramme Plans To Keep Working On His Agricultural Techniques And Expanding The Company’s Presence In The Industry

“Cannabis businesses need to insure property, crops, vehicles and employees, just like any other business. They have the same insurance needs.”

“I voted yes on Prop 64 because it is the next logical step to getting this federally overturned, if California, as 12 percent of the nation’s economy, really takes leadership with all of our universities, consumers, producers alike, we can be that next step.”

Daily Bruin (May 23, 2017) The snowy cap of Mount Shasta pokes through dairy farms in the northernmost tip of California. Not far away, a lone trailer stands off the highway next to a square of wooden fencing on a grassy hill. The trailer, filled with fans, wires and hangers, looks abandoned. But in the winter, it is used to hang and trim thousands of dollars of high-quality marijuana.

Law Street (May 23, 2017) Some convicts in California who have been charged with marijuana-related felonies are seeing their fortunes change with the state’s passage of Prop 64 last November. According to partial state data, since the ballot measure passed legalizing recreational marijuana in California, thousands of people charged with felonies for marijuana-related crimes filed requests to reduce their sentences from a felony to a misdemeanor.

Lexology (May 22, 2017) Following cannabis legalization in California, municipalities are beginning to face difficult decisions related to land use and planning. The challenge in siting industrial and residential uses, often in conflict, is not new for cities and their planners. But the new twist of cannabis growing and processing, treated as an industrial use in most cities, adds an added layer of complexity to land use decisions where lack of housing is also an issue.

Stock House (May 23, 2017) Wildflower Marijuana Inc. (CSE: SUN) (the ” Company “) signs a Letter of Intent to acquire the King Extract brand (the “ LOI ”), its trademarks and all proprietary formulations.  Currently, King is in over 50 retail outlets but is poised for growth having recently signed on with one of the largest distributors in California giving Wildflower access to over 600 retail cannabis stores.  King has also secured a steady supply of quality, pesticide free oil that can meet the demand of both the King and Wildflower products.

Weed News (May 23, 2017) Insurance Commissioner Dave Jones convened 63 insurance-related stakeholders to make sure they have time to comment on cannabis-related regulations with insurance provisions currently under consideration by other state agencies.

PR Newswire (May 23, 2017) StarGreen Capital announced today its plans to invest $100 million over the next year in California’s legal medical and recreational cannabis industries. StarGreen will provide capital and business development services to qualified partners representing every segment of the industry from “seed to sale.” Initial areas of focus for investment will include partnering with cultivators, manufacturers and retailers to acquire, develop and lease real estate, expand operations, and build cannabis consumer brands.

Paradise Post (May 23, 2017) Pot gardening was back on the Town Council’s agenda recently. Weed, that is, the controversial now legal-in-California recreational plant that alters one’s reality for a time. California law gives any adult citizen the right to grow up to six marijuana plants where they live for personal use. The Council decided in their last meeting that the leaves of marijuana may not receive either direct sun rays or fresh air, nor may their roots touch the earth in Paradise.

Ganjapreneur (May 23, 2017) A candidate for Ohio’s governorship next year and longtime liberal voice on the state Supreme Court has thrown his support behind full-on cannabis legalization in the state and is advocating for the release of “all non-violent marijuana offenders” from prison, according to a report from CleveScene.

Ganjapreneur (May 23, 2017) Vireo Health of New York has launched a medical cannabis advertising campaign in New York City’s subway system – the first of its kind from the state’s five licensed producers. The “Ask Your Doctor about Medical Marijuana” ads will appear in nearly 100 stations over the next four weeks.

Ganjapreneur (May 23, 2017) Georgia’s public schools cannot store medical cannabis products due to state and federal law, forcing patients to leave school grounds to take their medicine, according to NPR-affiliate WABE. School officials say that the state’s medical cannabis law, which only allows the use of low-THC oils, permits only the registered patient to store the oil, and some fear that their federal funding could be jeopardized by storing medical cannabis products.