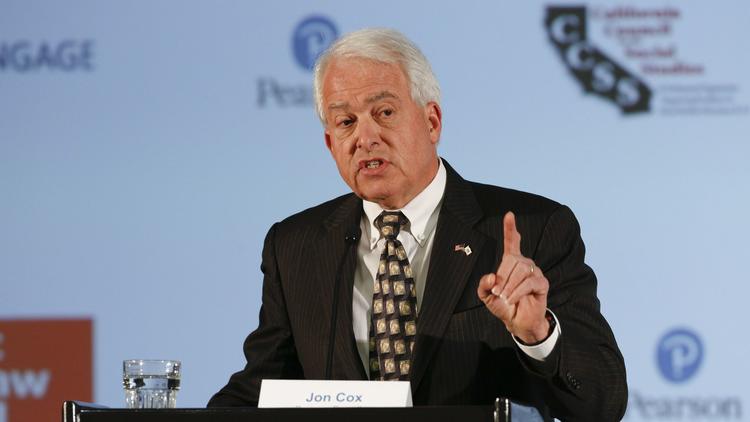 John Cox, A Businessman And A Republican Running For Governor, Answers A Question During A Debate In March In San Diego.

“I’m suggesting that people who are addicted to substances, substance abuse, should get treated, they should not be incarcerated.”
John Cox of Rancho Santa Fe, a Republican running for California governor.

“Our view is that, all in all, things went well. If they found anything out of compliance, they were minor issues that are easily remedied.”
Alex Traverso, Chief of Communications for the California’s Bureau of Cannabis Control, speaking on 4/20 events.

The Best Way To Fight Illegal Pot Is With Legal Cannabis (USA- Cannabis Regulations)
The Hill (April 24, 2018) Each year, more than 36 million Americans consume cannabis, and — even though it’s legal in some form in 46 states and the District of Columbia — the vast majority of individuals get their cannabis through the illegal market.
http://thehill.com/opinion/campaign/384557-the-best-way-to-fight-illegal-pot-is-with-legal-cannabis

California Governor Candidate Says Pot Users Should Be Hospitalized (CA-State Regulations)
The San Diego Union-Tribune (April 23, 2018) Businessman John Cox of Rancho Santa Fe, a Republican running for California governor, says that marijuana users should be hospitalized. He said that California should implement a system akin to the one in Portugal, where people who are found with small amounts of drugs can receive mandatory medical treatment but aren’t charged with a crime.
http://www.sandiegouniontribune.com/news/politics/sd-me-cox-marijuana-20180423-story.html

Want Equity, Sacramento? Invest Your Cannabis Taxes In Stephon Clark’s Neighborhood (CA- Op/Ed)
Sacramento Bee (April 24, 2018) Senseless tragedy has a way of shining a light on what needs to change, whether that was the murder of Emmett Till, the Parkland massacre or the unwarranted death of Stephon Clark.
http://www.sacbee.com/opinion/california-forum/article209695954.html

Cannabis Cup And Other 4/20 Events Smaller, But Not Dead, In Era Of Legal Weed (CA- Cannabis Industry)
OCRegister (April 24, 2018) California’s cannabis industry is struggling to transition to a fully regulated marketplace. And those growing pains were evident at the High Times SoCal Cannabis Cup, and similar events, held this weekend to mark marijuana’s unofficial 4/20 holiday.
https://www.ocregister.com/2018/04/23/cannabis-cup-and-other-4-20-events-smaller-but-not-dead-in-era-of-legal-weed/

The Best States To Live In If You Need Medical Marijuana Treatment (USA- Medical Marijuana)
The Cheat Sheet (April 24, 2018) What can medical marijuana do for you? That mostly depends on the health condition you hope to treat. Already, several million Americans already qualify as medical cannabis patients as of 2018.

How To Treat Multiple Sclerosis With Cannabis (USA- Cannabis Research)
High Times (April 24, 2018) In the US alone, over 400,000 Americans struggle with to manage the daily symptoms of Multiple Sclerosis (MS). MS is an autoimmune disorder that presents with neurologic manifestations. Patients may receive a diagnosis of relapsing-remitting or progressive types of the disease.

How To Treat Multiple Sclerosis With Cannabis

Gupta To Jeff Sessions: Medical Marijuana Could Save Many Addicted To Opioids (USA- Opioid Epidemic)
CNN (April 24, 2018) I feel obligated to share the results of my five-year-long investigation into the medical benefits of the cannabis plant. Before I started this worldwide, in-depth investigation, I was not particularly impressed by the results of medical marijuana research, but a few years later, as I started to dedicate time with patients and scientists in various countries, I came to a different conclusion.
https://www.cnn.com/2018/04/24/health/medical-marijuana-opioid-epidemic-sanjay-gupta/index.html

Legal Marijuana’s Big Moment (USA- Federal Regulations)
Politico (April 24, 2018) A couple of weeks ago, John Boehner was dining at one of his favorite Washington haunts, Trattoria Alberto on Barracks Row, when in walked Earl Blumenauer, the Democrat from Oregon known as one of the most fervent advocates for legal marijuana in Congress.
https://www.politico.com/magazine/story/2018/04/24/pot-marijuana-2018-congress-218069