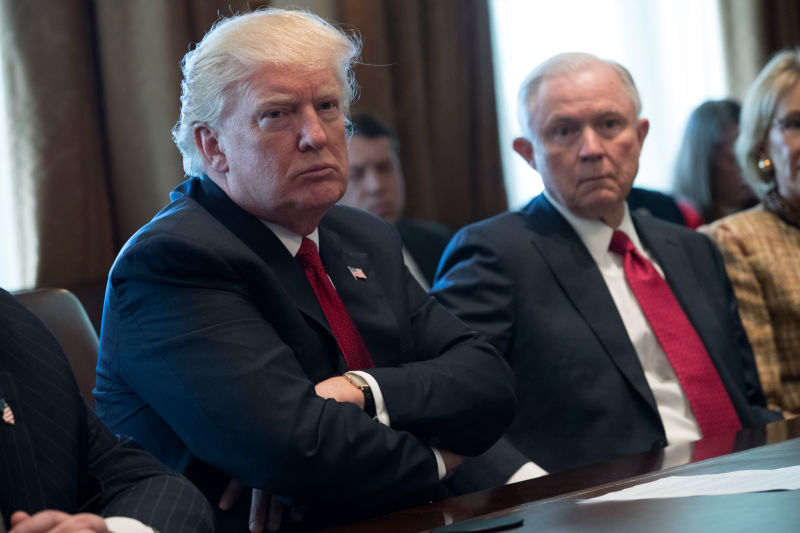 President Donald Trump And AG Jeff Sessions Sit Together As Trump Takes Lead In Supporting Legalized Marijuana
“By supporting this law, President Trump has arguably done more to advance the growth of the regulated cannabis industry than any other President.”
Isaac Dietrich, founder of the cannabis-oriented social network MassRoots.
“A secondhand report of the President’s word on a phone call is nowhere near what is needed here. Until there is formal legislative change or direction, similar to the Cole memo, the cannabis industry will remain skeptical.”
Derek Riedle, publisher of “Civilized,” a cannabis industry magazine

California Warns Legal Pot Sellers Not To Participate In Unlicensed 4/20 Events (CA- State Regulations)
Los Angeles Times (April 18, 2018) The state issued a warning Tuesday that businesses holding licenses to sell marijuana could face penalties if they participate in unlicensed temporary events away from their stores, including on Friday, April 20, which has become an annual celebration for counterculture groups.
http://www.latimes.com/politics/essential/la-pol-ca-essential-politics-updates-2018-htmlstory.html

Conflict Between University Rules, State Law On Marijuana Poses Challenges For Students (CA- State Regulations)
Daily Aztec (April 18, 2018) Four months after the implementation of Proposition 64, which legally permitted adults over 21 years old to use marijuana in the state of California, students at San Diego State spoke on their feelings towards the new policy.

The Health 202: Trump Is Backing Off The Marijuana Fight. But His Attorney General Has Not. (USA- Federal Regulations)
The Washington Post (April 17, 2018) Over the past week, Trump promised not to go after marijuana suppliers and users who are obeying their state laws, former House speaker John Boehner (R-Ohio) announced his formerly icy views toward the drug have thawed, and top Senate Republican Mitch McConnell pushed harder for legalizing the farming of hemp, pot’s non-psychoactive relative.
https://www.washingtonpost.com/news/powerpost/paloma/the-health-202/2018/04/17/the-health-202-trump-is-backing-off-the-marijuana-fight-but-his-attorney-general-has not/5ad4ebc330fb046acf7bcc9c/utm_term=.a31612a95572

Donald Trump Hates Jeff Sessions So Much, He Is Now In Support Of Legalized Marijuana (USA- Op/Ed)
The Root (April 18, 2018) Donald Trump hates Jeff Sessions with a passion. Sessions thought he was going to be a Trump guy, coming out all early in support of Trump for president. He thought he was in for sure when Trump put him up for the U.S. attorney general job. He was probably like, “I’m in there!”
https://www.theroot.com/donald-trump-hates-jeff-sessions-so-much-he-is-now-in-1825337077

Businesses optimistic, wary in wake of Trump’s pledge to back off cannabis

Golden State Green Rush: Is Cannabis Equity Reparations For The War On Drugs? (CA- Cannabis Industry)
Capital & Main (April 18, 2018) No state has a relationship remotely like the one between California and marijuana. We annually consume 2.5 million pounds of the drug and produce more than 13 million pounds of it.

Golden State Green Rush: Is Cannabis Equity Reparations for the War on Drugs?

Study: Marijuana Legalization Associated With This Important Social Change (CA- Cannabis Industry)
The Fresh Toast (April 18, 2018) When citizens vote to legalize and regulate cannabis, crime rates go down, according to a study. According to data published in the Journal of Economic Behavior & Organization, adult use marijuana laws are associated with lower levels of property crimes and violent criminal activity.

Feel Like A Day At The Spa? There’s A Cannabis Strain For That (USA- Cannabis Industry)
Bloomberg (April 18, 2018) Smiling millennials, sleek packaging, talk of personal journeys: Canadian pot companies are revving up the marketing.
https://www.bloomberg.com/news/articles/2018-04-17/feel-like-a-day-at-the-spa-there-s-cannabis-strain-for-that