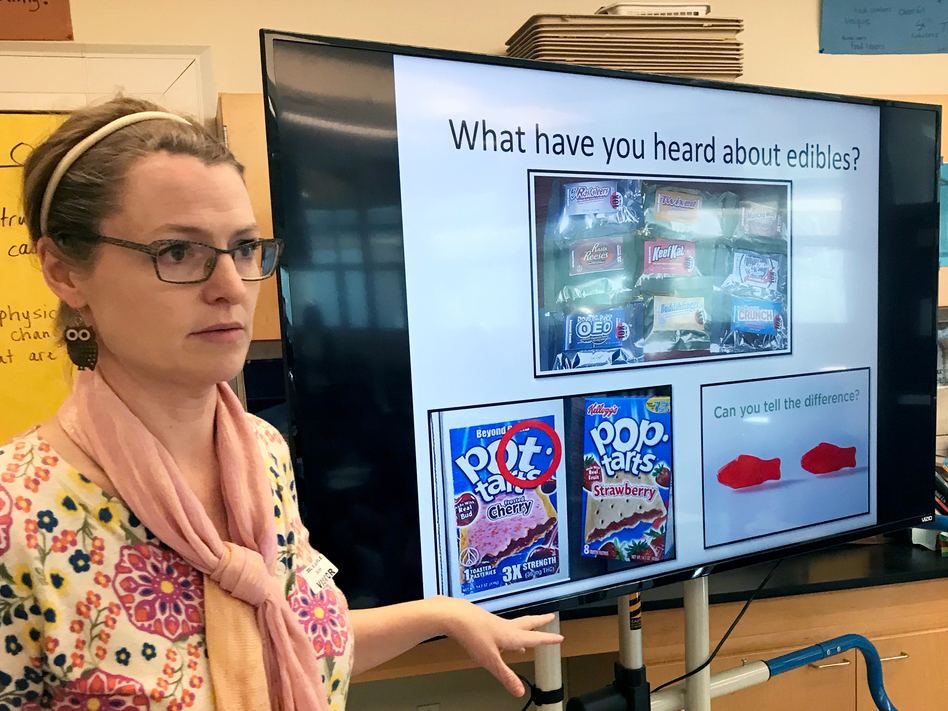 Cannabis & Adolescents: What California Can Do To Postpone Underage Use

“Those scare-tactic-based programs have tended to quite clearly not work, based on most of the research that evaluated its effectiveness. Today there is an entirely different mindset about school-based prevention. More research is coming out looking at the ways in which all different kinds of substances can hijack normal brain functioning, and particularly so in adolescence.”

“The Farm Bill of 2014 made industrial hemp-derived products, including CBD, legal to sell and use. But there are a number of laws on the books that still create confusion around this topic. The fact that cannabis remains a Schedule I drug certainly creates confusion, since hemp and marijuana are both members of the cannabis family, despite the fact that they are indeed different plants, most notably in their levels of THC.”

With The Rise Of Legal Weed, Drug Education Moves From ‘Don’t’ To ‘Delay’ (CA – Underage Use)

Capitol Public Radio (June 3, 2018) California legalized marijuana in 2016, and on Jan. 1, 2018, eager customers lined up in the darkness outside medical marijuana dispensaries across the state, ready to start shopping at the stroke of midnight. The effect has gone beyond the cannabis cash register. Everyone has seen the ads or heard the chatter — and that includes minors, though marijuana remains illegal for those under 21. The rollout of legal recreational marijuana in California and other states doesn’t appear to have led to any big changes in substance abuse prevention yet.

VC Star (June 2, 2018) By some accounts, the legalization of recreational marijuana in California has coincided with a spike in the number of people seeking medical help for cannabis-related incidents. But the severity of the problem, if it exists, is an open question, as not every expert is seeing the same trend and data on cannabis-related health emergencies is only now starting to be collected.

Herb (June 2, 2018) When California voters legalized recreational marijuana in November 2016, they also passed a measure which permits people with cannabis offenses to either clear their records completely or downgrade their offenses. The measure, in theory, stands to benefit hundreds of thousands in the state, but few have taken advantage of it because, up until now, the process has been confusing and often expensive.

North Coast Journal (June 3, 2018) With pot prices plummeting, it can sometimes feel as if Humboldt’s economic sky is falling. But on a federal level, the interest in easing restrictions on ganja is growing. North Coast Congressman Jared Huffman visited a smaller-sized cannabis farm Friday in what might indicate an interest on his part to join some senators pushing decriminalization.

Press Democrat (June 3, 2018) Sonoma County voters embraced marijuana legalization when it was on the ballot two years ago, but now that it’s a reality — a rapidly evolving industry and source of ongoing dispute — nearly half of those surveyed say they don’t want cannabis cultivation anywhere near their homes, according to The Press Democrat Poll. A substantial plurality, 46 percent, of poll respondents said they “would not feel safe with a cannabis farm within any proximity to my residence,” while only 19 percent said they would feel safe with a farm adjacent to their residence.

KQED News (June 2, 2018) Hundreds gathered Saturday at the Sonoma County Fairgrounds in Santa Rosa to do something that’s pretty rare in this country: legally buy and consume marijuana products at the same place. Organizers say the two-day Cannabis Cup, put on by the marijuana media company High Times, is just the second event in the country to allow visitors to buy and consume marijuana all in one place.

High Times (June 4, 2018) The 2018 Northern California Cannabis Cup saw contestants who all brought their A-Game. After careful consideration, the judges have decided upon the winners. The NorCal Cannabis Cup brought many accomplished and talented companies, growers, and innovators to the spotlight

Westworld (June 2, 2018) The industrial-hemp industry may have gotten a nod of approval from the Drug Enforcement Administration in late May, when the agency clarified that not all compounds of cannabis fall under the Controlled Substances Act. Referencing a 2004 decision by the Ninth Circuit Court of Appeals that excluded non-psychoactive cannabinoids from the federal government’s definition of marijuana, the announcement came after the DEA says it had received numerous inquiries on the matter.

EIN News Desk (June 3, 2018) The industrial-hemp industry may have gotten a nod of approval from the Drug Enforcement Administration in late May, when the agency clarified that not all compounds of cannabis fall under the Controlled Substances Act. Referencing a 2004 decision by the Ninth Circuit Court of Appeals that excluded non-psychoactive cannabinoids from the federal government’s definition of marijuana, the announcement came after the DEA says it had received numerous inquiries on the matter.

Marijuana.com (June 1, 2018) Some credit for the “green rush” bringing Canadian companies into the US cannabis market is due to a snag that makes it difficult for American firms to go public and access waiting investment capital. US firms that deal in the cannabis market that wish to be publicly traded are highly scrutinized by the US Securities and Exchange Commission (SEC), and until very recently, all plant-touching companies have steered clear of public offerings to avoid any issues that would arise from being in conflict with federal law, according to Phil Brown, chief strategy officer with Intelligize, the LexisNexis-owned market data-gathering service.

Pot Network (June 4, 2018) In an industry projected to be worth upwards of $40 billion in the next three years, one would think that banks would want a piece of this pie. But due to federal law that is not the case. Procuring funding in the cannabis industry is difficult, almost impossible. The federal regulations on marijuana in North America prevent banks from investing in cannabis the way they can in other commercial industries. But even without the support of big banks, many pot stocks are still finding success. And in the United States, where pot is still illegal, investment firms are getting creative about how and where their funding goes.

U.S. News Health (June 4, 2018) Some 30 states – including California, where I live – now have legalized medicinal or recreational marijuana laws. That means a growing number of canna-curious men and women are trying cannabis edibles to improve their health – not to get high. The new cannabis consumers are a stark contrast to stereotypical stoners who eat Taco Bell and watch “Rick and Morty.” They’re more likely to be foodies in their fifties who don’t smoke, vape or eat gummies. They want micro-doses of medicinal marijuana infused into great-tasting, all-natural, wholesome foods and beverages to improve sleep, bolster immunity, alleviate pain, mitigate migraines and much more.

Chicago Sun Times (June 1, 2018) Last week, a Florida judge ruled that the state’s ban on smokeable medical pot is unconstitutional. Leon County Circuit Court Judge Karen Gievers ruled in favor of People United for Medical Marijuana and two patients challenging the ban, according to USA Today. Voters approved a constitutional amendment in 2016 allowing the use of medical marijuana through vaping and in food, oils, sprays and tinctures. The Legislature last year included a provision banning it from being smoked, and Gov. Rick Scott signed the measure into law in June.