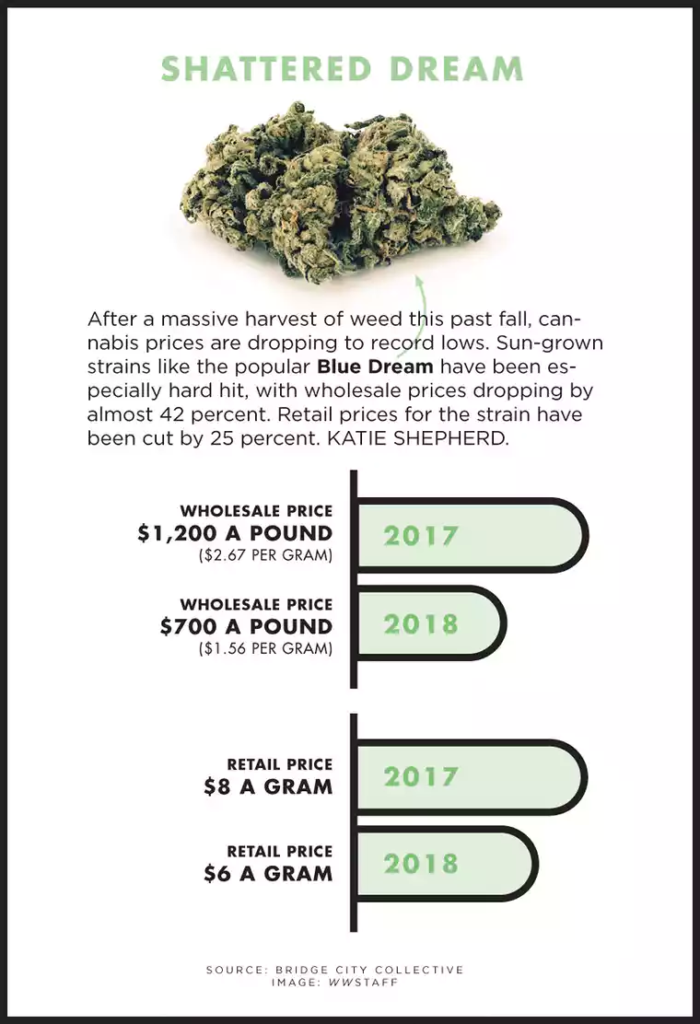 Bud Prices Plummet As Oregon Farmer’s Grow Too Much Product, Panic Begins To Set In

“The market is now in a position where only the large businesses are the ones that produce at a lower cost can survive.”
Economist Beau Whitney On Oregon’s Local Dispensaries Struggling To Stay Afloat

“Like many of us on this dais, I’ve heard from many veterans who believe medical cannabis can help them lead healthy lives. Right now, we don’t know if that’s true or not, and that’s why we believe the VA should conduct rigorous research on medical cannabis just like any other medication or treatment.”
House Representative Phil Roe, R-Tenn., On Exploring Medical Cannabis 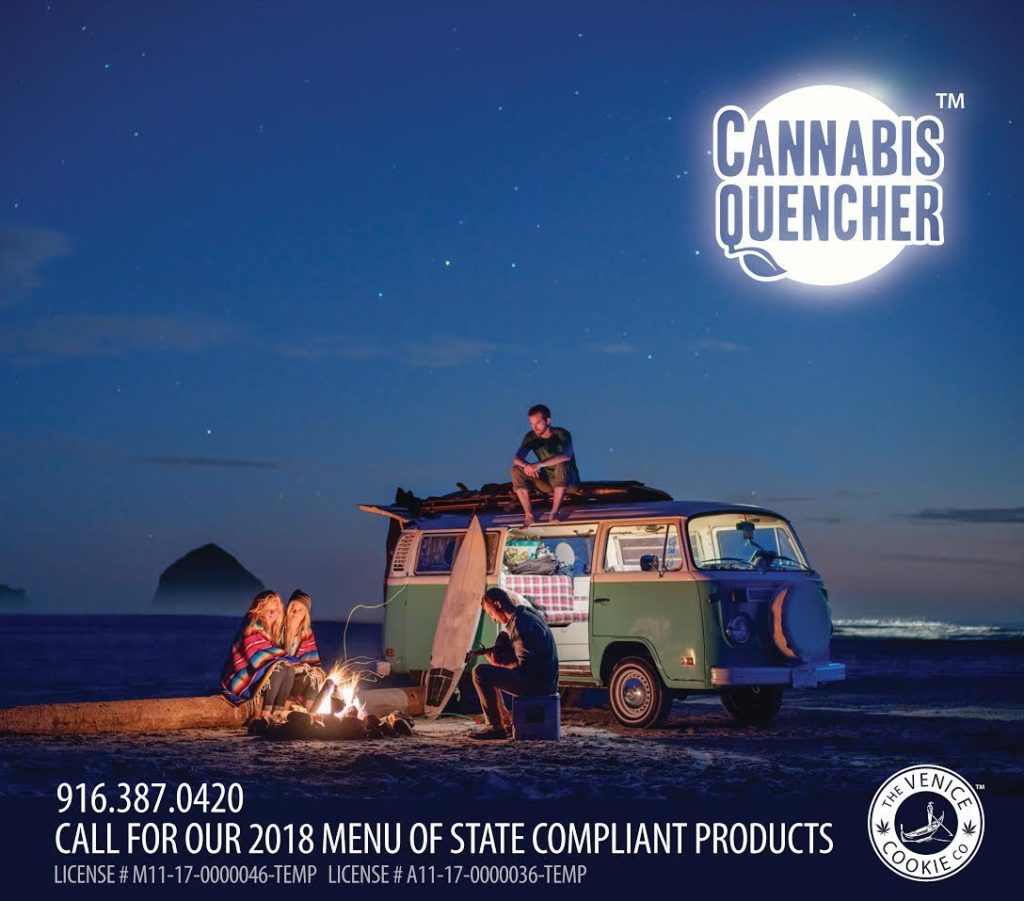 Federal Agents Search Adelanto Mayor’s Home, City Hall Amid Corruption Probe (CA – Cannabis Industry)
Los Angeles Times (May 8, 2018) Adelanto Mayor Rich Kerr had a plan to cure the long-struggling city’s deep financial woes. He would make the desert town, with its vast stretches of cheap land, into the Silicon Valley of marijuana. Since 2015, under Kerr’s leadership, officials have worked diligently to attract the cannabis industry. The efforts drew national attention and led to a land rush as entrepreneurs sought to take advantage of Adelanto’s welcoming posture.
http://www.latimes.com/local/lanow/la-me-ln-adelanto-fbi-raids-20180508-story.html

California’s Marijuana Tax Collections Lag Below Expectations (CA – Cannabis Revenue)
The Sacramento Bee (May 9, 2018) California probably won’t get a windfall in tax revenue from its newly legal marijuana market this year. The state collected $34 million in cannabis taxes between January and March, according to an update released by the Legislative Analyst’s Office on Tuesday.
http://www.sacbee.com/news/politics-government/capitol-alert/article210741769.html

Mother’s Day Cannabis Gift Ideas (CA – Cannabis Gifts)
East Bay Express (May 9, 2018) More and more parents are making an informed, adult choice to responsibly use cannabis. Out on the soccer fields on Saturday mornings, I hear stuff like, “I’ve been thinking about it, and it’s time I got back into weed.” Hell yeah.
https://www.eastbayexpress.com/oakland/mothers-day-cannabis-gift-ideas/Content?oid=15872053

Escape From Los Angeles: Marijuana Businesses Leave As City Struggles To Roll Out Legal Market (CA – Cannabis Industry)
Marjuana Business Daily (May 8, 2018) Marijuana companies are fleeing Los Angeles, a setback for what is arguably the biggest cannabis market in the world. Industry executives blame city officials and their inability to approve business licenses in a timely manner.

Cannabis Versus Cancer (USA – Medical Marijuana)
Scientific American (May 2, 2018) As the legalization of medical marijuana becomes more common worldwide, medical cannabis is being prescribed by doctors and caretakers to help treat cancer-related side effects—either from the cancer itself or from treatments like chemotherapy. Countless scientific studies have shown that medical cannabis offers palliative care benefits, including appetite stimulation, pain relief and more.
https://blogs.scientificamerican.com/observations/cannabis-versus-cancer/?_cldee=YWhhd3Rob3JuZUBjYWxob3NwaXRhbC5vcmc%3d&recipientid=contact-328c1358e6c3e51180cd2c44fd7ff449-68ab9a7c7ec64245ab095061681c8873&utm_source=ClickDimensions&utm_medium=email&utm_c

Lawmakers Advance Bill Pushing VA to Research Marijuana (USA – Cannabis Research)
Military.com (May 9, 2018) House lawmakers took a step forward Tuesday to push the Department of Veterans Affairs to research the safety and effectiveness of medical marijuana. The House Committee on Veterans’ Affairs voted unanimously to advance the VA Medicinal Cannabis Research Act to the House floor — a bipartisan attempt to encourage the VA to study the drug as a treatment for post-traumatic stress disorder, chronic pain and other ailments that disproportionately affect veterans.
https://www.military.com/daily-news/2018/05/09/lawmakers-advance-bill-pushing-va-research-marijuana.html

Here’s How Much Marijuana Costs In The United States vs. Canada (USA – Cannabis Value)
Priceonomics (May 8, 2018) A tidal wave of change is hitting the cannabis industry in both the United States and Canada. In the United States, medical marijuana is now legal in 29 states. Not only that, but the recreational use of marijuana is now legal in 10 states. You can walk into a licensed store in places like California, Oregon and Colorado and purchase cannabis nearly as easily as buying beer.
https://priceonomics.com/heres-how-much-marijuana-costs-in-the-united/

How Do You Move Mountains Of Unwanted Weed? (OR – Cannabis Cultivation)
The Guardian (May 9, 2018) A recent Sunday afternoon at the Bridge City Collective cannabis shop in north Portland saw a steady flow of customers. Little wonder: a gram of weed was selling for less than the price of a glass of wine.
https://www.theguardian.com/society/2018/may/09/how-oregon-grew-too-much-marijuana-to-sell

Anti-Marijuana Group Says It’s Working With The DEA To Sabotage Medical Pot (UT –  State Regulations)
Think Progress (May 8, 2018) Federal officials are getting dragged into a state-level fight over medical marijuana, after opponents of a ballot initiative to legalize the idea in Utah claimed that the Drug Enforcement Agency supports their efforts. The group, Drug Safe Utah, is a registered political organization fronting for the ultra-conservative Eagle Forum – the organization once run by the late Phyllis Schlafly – and the state’s health care lobby, the Utah Medical Association.

For Cannabis Activists In New York City, Racial Justice Is A Major Topic Of Conversation (NY – Legalization)
Herb (May 7, 2018) The marijuana movement has made significant gains in recent years: Nine states plus D.C. have legalized adult-use cannabis, 30 states have legalized medical marijuana, and members of Congress on both sides of the aisle have introduced legislation to end federal prohibition. State-legal marijuana is now a multi-billion-dollar industry, and 63 percent of Americans support legalization.
https://herb.co/marijuana/news/nyc-cannabis-parade

Boston Blazes Trail With New Recreational Marijuana Zoning Regulations (MA – State Regulations)
The Harvard Crimson (May 8, 2018) The Boston Zoning Commission voted last month to approve zoning regulations for recreational marijuana businesses in Boston, marking a milestone in the ongoing legalization of recreational sales in Boston. Among other things, the new regulations permit businesses to sell on the main streets of Boston and in any of the city’s business districts, but prohibit marijuana dispensaries from opening within a half mile of one another or within 500 feet of existing elementary or high schools.
https://www.thecrimson.com/article/2018/5/9/boston-approves-recreational-marijuana-zoning/