CCMA Greenbrief October 8: The Fight Against The CA Illicit Market Results In 52 Arrests…States Fearing “De Facto Legalization”…The CBD Market Is Stuck Between The FDA & The DEA…

“This year’s results put an exclamation point behind California’s multi-agency illegal cannabis campaign, holding accountable individuals who damage our public lands and hurt our communities. At the California Department of Justice, we will continue to work with our partners at the federal, state, and local levels through our CAMP program to vigorously enforce California’s laws against illegal cannabis activity.”
CA Attorney General Xavier Beccera On The Crackdown On Illicit Pot Grows

“When you can see how different cannabis stores in your neighborhood are from the unregulated criminal market, you see the effects of businesses moving into storefronts that generate jobs and tax revenue. A lot of people talk about a ‘blue wave’ leading up to elections, but you can call the evolution of cannabis a ‘green wave.’”
Tom Angell, Publisher Of Marijuana Moment, On States Fearing The Legalization Market 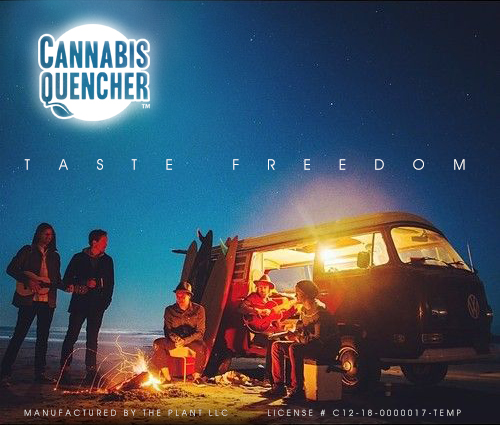 Lake County News (October 5, 2018) California Attorney General Xavier Becerra on Thursday announced the arrest of 52 individuals as part of the Campaign Against Marijuana Planting, or CAMP, Program, which is the largest illegal marijuana eradication program in the nation. This year, CAMP eradicated 614,267 plants in over 254 illegal grow sites across the state. Agents also seized 110 weapons. Three arrests occurred in Lake County, according to the Attorney General’s Office. The 12-week CAMP operation headed by the California Department of Justice includes local, state and federal agencies that work to eradicate illegal indoor and outdoor marijuana cultivation and trafficking throughout California.

KTLA (October 4, 2018) A crackdown on illegal cannabis grows resulted in the arrest of 52 individuals across the state, officials said. Agents eradicated more than 614,000 plants in over 254 illegal marijuana farms across the state, as well as seized 110 weapons. California Attorney General Xavier Becerra announced the arrests on Thursday. There have been about 127,000 plants uprooted in Southern California as well as 47 illicit grows eliminated, 23 arrests and 13 weapons seized. During the 12-week operation, four groups of investigators targeted the following Southern California counties: Los Angeles, San Diego, San Bernardino, Riverside, Imperial, Kern, Ventura, Santa Barbara and San Luis Obispo.

Marijuana Business Daily (October 8, 2018) San Francisco officials plan to create a new committee to monitor the city’s cannabis industry and assess its regulations and government oversight. Naomi Kelly, the city administrator in charge of the Office of Cannabis, initially opposed the new committee because it would require the office to provide extensive data and reporting, with no additional funding, the Examiner reported. Her concerns were addressed, and she no longer opposes the committee.

OP-ED: If Cannabis Is Legal In California, Why Are So Many Black-Owned Cannabis Businesses Considered Illegal? (CA – Cannabusiness)

Black Press USA (October 7, 2018) One of the great advantages of Proposition 64 – the 2016 ballot initiative that legalized adult use of cannabis – was the idea that it could start to address the disproportionately negative impact of marijuana arrests among communities of color. This disparity is well documented. Just a few years ago, the American Civil Liberties Union reported that African Americans were nearly four times more likely to be arrested for marijuana possession than whites, even though use of the drug was roughly equal among both populations. Prop 64 not only promised to reduce or expunge certain past convictions, it also presented employment opportunities in the newly legalized cannabis industry as a gateway to the middle class for many underserved communities.

Plumas News (October 6, 2018) Signs, websites and opinion pieces have popped up to express a range of views on Measure B, Plumas County’s land use ordinance for commercial cannabis. To help voters understand what they the measure, Plumas Action Network is hosting a forum featuring the ballot measure’s authors as well as the citizens’ working against the measure. The forum will be held Wednesday, Oct. 10, from 6 to 7:30 p.m., at the Quincy Library. Attorney and former prosecutor Jeff Cunan will serve as moderator. The format will be similar to League of Women Voter events, where each side will give an opening statement and then will answer questions submitted by audience members.

Politico (October 6, 2018) When Jason Nemes, a Republican legislator in deeply conservative Kentucky, proposed a bill allowing the sale of medicinal marijuana this year, he included strict conditions to prevent doctors from rampantly prescribing the drug. After all, Nemes has no interest in actually legalizing pot: He hasn’t smoked, he’s decidedly anti-drug and, until recently, he was even skeptical of marijuana’s effectiveness for treating conditions like cancer or epilepsy. He has good reason to be worried. With nine states, and the District of Columbia, now allowing the recreational use of cannabis — and more in the pipeline — advocates on both sides of the issue say that medical cannabis programs are increasingly functioning as a Trojan horse for de facto legalization in the 40 states where the politics of legalization aren’t quite ripe yet. And that’s rapidly changing the political and policy dynamics surrounding the emerging industry.

Reason (October 5, 2018) A letter from the Department of Health and Human Services (HHS) to the Drug Enforcement Administration (DEA) reveals that medical reviewers at the Food and Drug Administration (FDA) and the National Institute on Drug Abuse (NIDA) believe the federal government should lift its ban on cannabidiol, a cannabis-derived compound commonly marketed as CBD. HHS Assistant Secretary Brett Giroir sent the letter, which Marijuana Moment’s Tom Angell obtained and published this week, to DEA Acting Administrator Robert Patterson, who has since retired, in May.Drugs in Schedule V, which is the least restrictive category for controlled substances, have demonstrated medical value and are deemed unlikely to cause harm, abuse, or addiction. By contrast, drugs in Schedule I, where CBD currently sits as a component of marijuana, are supposed to have no recognized medical value and a high potential for abuse.

Forbes (October 8, 2018) Ancient Egyptians heated herbs and oils on hot stones to create potent vapors they could inhale. Today, the fastest-growing segment in cannabis is the old-fashioned vaporizer, but the high-tech 21st-century version is vastly different from those humble hot rocks — and it’s helping create new markets for cannabis. As the legal cannabis market matures, it’s driving advances in how users consume it. In fact, the quickly evolving market is forcing producers to adapt to changing expectations and consumers’ increasingly developed palates. Many producers are turning to technology to meet those demands, as well as to expand their customer bases.

Money Morning (October 6, 2018) It’s not surprising to see big moves for stocks in emerging industries. Cannabis stocks are no exception, and we saw big moves all summer, especially after each company announced advancements in its commercialization. But the biggest moves may be sparked by our elected representatives in Washington, D.C. It’s easy to see the cannabis wave coming. Week after week, we see policy and attitude changes on the state and local level. And its champions come from both sides of the aisle. Money Morning Director of Cannabis Investing Research Greg Miller pointed out that when the United States finally moves to full legalization, the cannabis market will explode and create countless cannabis millionaires. It will become the most lucrative market in the world.

One Stock For The Coming Marijuana Boom (USA – Cannabis Investments)

USA Today (October 8, 2018) A little-known Canadian company just unlocked what some experts think could be the key to profiting off the coming marijuana boom. And make no mistake – it is coming. To the tune of an estimated $50 billion. Cannabis legalization is sweeping over North America – 10 states plus Washington, D.C., have all legalized recreational marijuana over the last few years, and full legalization comes to Canada in October 2018. Legal marijuana was worth $10 billion for the U.S. in 2017 alone. And since experts have projected the U.S. industry to skyrocket to $50 billion by 2026, it’s time for investors to start paying attention. Because whether or not you’re planning on ingesting any THC, you can’t deny the monumental investing opportunity that a potentially $50 billion industry represents.

Cannabis In Space Is Just Around The Corner (World – Cannabis Research)

Forbes (October 7, 2018) As legal marijuana profits continue to reach stratospheric heights, it appears so too may the cannabis plant itself expand into space — soaring 250 miles above Earth within NASA’s International Space Station (ISS). With plans to test how hemp plants react in the low-gravity setting of space orbit, scientists at bioengineering company Space Tango — specializing in research and manufacturing of microgravity environments — are eager to test the cannabis plant’s response to novel environs like spaceflight. Orbiting Earth in the stress-free atmosphere of space might just provide the pharmacological outcomes scientists are looking for.

Marijuana Moment (October 5, 2018) With about one month left until voters head to the polls, things are heating up in the fight to legalize medical marijuana in Missouri. Three competing medical cannabis ballot initiatives—including two proposed constitutional amendments and one statutory measure—officially qualified for the ballot in August. And in the weeks since, sponsoring committees for the proposals have engaged in a public rivalry that’s landed Missouri in the national spotlight.